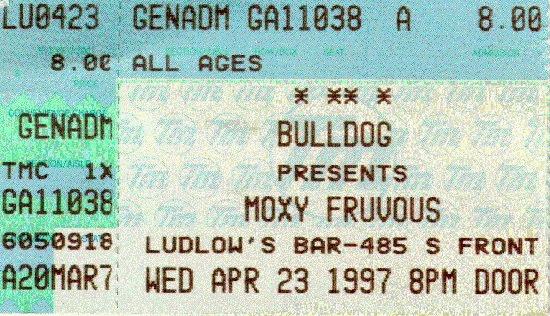 Well, the show ended almost 24 hours ago, and I didn't manage to take any notes, so this will be a very sketchy report. The show was at Ludlow's Bar, which is really a neat place...a converted warehouse. Anyway, let me get the bad part out of the way first: While the sound mix was good, it was TOO @#$! LOUD!! A word to any sound man---when you hear that little 'ring' off the vocal mics, it is too loud. When the audience members are holding their ears and walking out with wind-in-the-face hairdos, IT'S TOO @*%%@! LOUD. My ears are still ringing. Aside from that, it was a great show. Local acappella gang Throat Culture started things off...their set got off to a slow start, but once they found their groove, it went off well.

Then Fruvous arrived on stage...late, as usual, and put on a high-power 90-minute show...starting with the obligatory 'indecision/buy our disc' then starting with Lazlo and BJ. The big suprise was Laika, which I have never heard "live" before. One of many trips scheduled for the evening. Other offerings included Sahara, No No Raja, Incredible Medicine Show, and Kick in the Ass from the new album; Horseshoes and Fly from Wood; Video Bargainville, Laika, Authors, River Valley, BJ, and of course King of Spain from Bargainville, with King of Spain segueing right into Green Eggs & Ham. Uh...Johnny Saucep'n and I Love My Boss from B. Plenty of abuse for WCBE's Maxx Faulkner, who wasn't even there. And we knew it was over when they did The Drinking Song. After the show, Murray left in a hurry and Dave and Mike both sounded a bit hoarse. All in all, a really good show. Well, did you expect anything less?