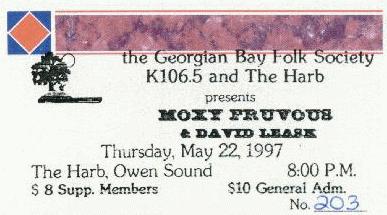 My very first Ontario triple crown. Mike had told me in Albany that I would be seeing some very beautiful areas of Ontario, so I was definitely looking forward to this trip. Until now, I had only been to Hamilton and Toronto.

I left Rochester around noon and thanks to every form of construction imaginable, I didn't make it to Hamilton until past two. I picked up Heather Rolph, just one of the people who is attending this little "Früvous Trilogy". We headed for Owen Sound, and, once again, thanks to the marvels of modern road work, we got to the town by around five in the afternoon.

We were planning on meeting a bunch of people there, but we were keeping an eye out for Sharilyn, Beryl, and Nikolai, who came all the way from Seattle for these shows!! I think that may set a record for longest distance travelled to see a show. Ceecee and Sharilyn are most likely the other contenders for that title.

The venue was a small bar with a stage in the back; very cozy. The sound quality was surprisingly good, considering the size of the place. I showed Marcus my new car (!!), the multi-ton vehicle that carries my "FRUVOUS" license plates all over these great lands of ours. After everyone showed up, we staked a table near the front of the concert area, chatted with Mike and Murray for a bit, and waited for things to get under way.

Nikolai looked like he was about to explode, since this is the first time he's ever seen Früvous. He was very happy that he was able to talk to the guys; they all knew he had come from such a long way.

At around eight or so, the first peformer, David Leask, came on stage. He played guitar, and was accompanied by an upright bass and a fiddle. David had a very thick Scottish accent, which I personally love to listen to. He could've just talked for an hour, and I would've been set. Their music had a celtic feel to it; very nice.

Moxy hit the stage at around 9:30. They played for about an hour and a half, filling the set with impromptu bits and other oddities. I'm really pleased they did Horseshoes; that song has been put on the back burner a little bit lately.

After the show, we talked to the guys for a looooong time. :-) Mike talked to a couple of us for about an hour, and I asked him a bunch of lyric questions. When I couldn't think of any more things to ask him, he exclaimed, "Come on! Keep asking! This is fun!" I had an awesome time after the show; it's so cool to be able to talk to them for so long after a performance.

At around one in the morning, Heather and I headed back to Hamilton, while Beryl, Sharilyn, and Nikolai went to their hotel in Owen Sound. We're all meeting up at Port Dover for part two of the Ontario triple crown!!