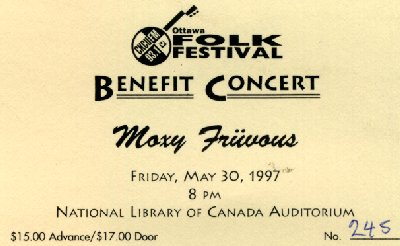 This was one of the first shows that I've ever attended by myself. I knew of one person on the ng who would be at this show, but I'd never met him before. This was also my first time visiting Ottawa, and Mike said it's a beautiful city.

I managed to drive from Rochester to Ottawa in four hours, but since I left at ten in the morning, I got there significantly early. I didn't really plan much ahead for this trip, so I kind of had to wing it. I drove around Ottawa for about an hour, and found the National Library, where Fruvous was playing that night. The Radisson Hotel is nearby, so I got a room there.

Mike was right about Ottawa; it's phenomenal. Clean, safe, and the buildings are amazing. The National Library is right next to Parliament and a bunch of museums; an architect's dream.

Doors opened at 7:45 and at 8:15 a young woman from the area, named Meg Lunney (sp?) performed for about half an hour. She reminded me a lot of Tori Amos; she had similar vocal inflections. She's apparently quite popular in the area, and quite versatile. She played piano, guitar, and also did some a cappella numbers.

Moxy came up on stage pretty much at nine. They did a longer set than usual, but only one set of encores, so it ended up being a pretty standard length show. The audience, mostly comprised of older people, loved them. Dave exclaimed, "It's so nice to have an audience who laughs at our jokes."

I met a guy named Army, who sat next to me during the show. Apparently, he's an old friend of Murray's, and they went to University together. He was blown away when I told him that Moxy was my favorite band. He said, "It's so weird to hear that your friend's band is someone's favorite." He seemed to get a charge out of how many shows all us Fruheads travel to see.

After the show, Jason from the ng and I talked to the guys briefly. Mike is still working on that surprise for the web pages (can't wait to see it!). Jian was talking politics with some people, and I really didn't understand what they were talking about. Jian looked at me and said (jokingly), "Yeah. Americans. You don't know anything about Canadian politics. Get out of here!" He also told me that the band has something special planned for the Clinton show the next night. Can't wait!!

I ended up leaving shortly after that, and getting back to my hotel at around 11:30. Not bad. Can finally get some rest in anticipation of the Clinton show. Fruhead reunion, let's go!!

Opened with The Set Closed with Encore 1