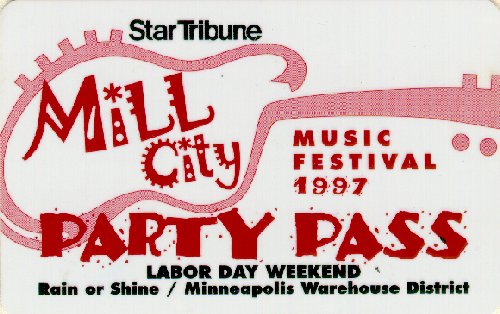 Just got back from the Fruvous set at the Mill City Music Festival in Minneapolis.

It was a pretty standard set for a festival--they started off telling the people sitting on the astroturf that "we've got an hour to get you up off your asses!" and told people to stand if they liked what they heard. Then they proceeded to get most of them up off their asses with the set..

They played for about an hour, and got thru at least the following (i don't promise to remember everything...):

Jockey Full of Bourbon featured Weird Al Yankovic on the accordion. Dave moved to accoustic guitar (where he broke a string 10 seconds into the song...) Weird Al got a brief solo during the song, and the band (Jian in particular) seemed quite thrilled to have him up there..

Apparently, Al has been a fan of Fruvous for a while. They offered him YWGTTM and the b album. Turns out he already had the b album.. he stayed through most of their set, leaving after Green Eggs and Ham. (Weird Al also did a green eggs and ham rendition during his set...)

At the festival, Weird Al played just before Fruvous on the main stage. His set was very cool--he moved from one song and one character to the next without even stopping to breathe. He wore at least 20 different costumes during the hour and a half set, and hardly broke a sweat... it was great to see him live finally..

Thanks to Heather Risher for these:

Opened with The Set