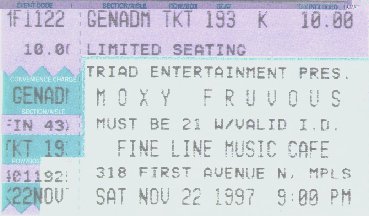 I don't post here often but i had to say something about this show.

It was REALLY good!!! it was my sixth fruvous concert. and i think it was my favorite. they were totally on the ball musically.. NO technical problems at all (which i think as a first for when I've seen them) and they were energetic as always.

they explained to us that they'd had a very bad day.. the fru-bus had broken down in eau claire, wisconsin (something about "uh, you got no transmission here, guys") and they'd spent a lot of time in a rest stop type place and were told that they couldn't get it fixed until monday because everyone was out deer hunting. they poked fun at deer hunting for a while.. it was hilarious, of course... and basically just told us they'd had a shitty day and were glad to be here after such a grand list of setbacks.

the setlist was similar if not identical to the milwaukee show. they did close with the drinking song however. i think it was the best version of that i've ever heard. oh.. and a comment on the new versions of gotta get a message to you (a cappella) and green eggs and ham.. i applaud!! i LOVED the a cappella one to start the show out. way cool. i also highly enjoyed Fell In Love.. i don't think i'd seen that one live before?? hm. i also laughed heartily at the beginning of Lazy Boy. Jian: "who here has a stereo that rocks?"

oh. um. did ANYONE tape this show??? i dunno if you guys do that. but. if anyone did. i'd like.. sell my soul to you. or whatever. i was gonna tape it but then i would feel stupid cheering or anything cause the tape would pick it up so loud. anyways. it was my last moxy fruvous concert for a while because i'm moving out to California in a month and they don't come out there. (but they SHOULD! they SHOULD!) anyways. email me if you taped it... i'll uh..trade anything you can think of.. or pay whatever...