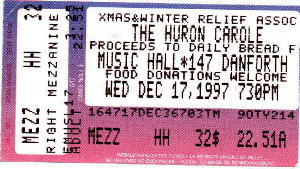 Just got back from the Huron Carole benefit -- a memory-searing event, so eminently . . . Canadian, you could fairly taste the maple syrup. All that was missing was the snow, but you didn't hear anyone complain about the balmy night. Aside from our golden boys, who were, by the way, spectacular tonight and who had been up since the crack of dawn preparing for and promoting the benefit, the playbill included Duane Steele, Patricia Conroy, Prescott Brown, members of the Toronto Blues Society (featuring Rita Chiarelli, Jani Lauzan and Jackie Richardson), Dini Petty, Andy Barrie and Jennifer Podemski. Hosts for the evening were well-known actors, the charming and chummy Tom Jackson and Graham Greene. Tom Jackson performed the common-thread "Huron Carole" song, toward the end of the program, a song I had not heard or sung since elementary school. It really ought to be returned to the popular Christmas song canon . . . .

"Our" boys performed, in order, "Gotta Get A Message", "MBLABOA", a reprise, with minor changes of this morning's Breakfast Television's version of "Minnie the Moocher", "Today is the Day That We Fight Back" and a *potentially* haunting version of the "Gulf War Song" (had the locals who were NOT familiar with this song refrained from giggling at a number of the lines which, until tonight had never struck me as being particularly funny . . .). Betraying not the least bit of fatigue, howsoever fresh from what must have been one of the more exhausting legs of this year's tour, the Frufour were indeed "up" for the occasion and were very warmly introduced and received by Metro Morning radio host, Andy Barrie, and the predominantly grey-haired audience, respectively. The energy and audience feedback reminded me of the Taste of the Danforth show. The fellows joined in, along with all the other performers, to sing the finale, a swaying, almost . . . sentimental sounding "Silent Night". Tonight's show pulled in an estimated $18,000 in ticket receipts and donations, including several dumpster-sized boxes of donated canned goods. It is expected that the 14-venue roving Huron Carole shows will garner nearly $6,000,000.00 in donations, both corporate and individual, for the Daily Bread Food Banks. The Brandon, Manitoba, show was taped by the CBC-TV and will air on Christmas Day between 6 - 7 p.m. Once again, our lads generously participated in a vital, humane, charitable event, and I for one am doubly proud of and grateful to them.

My children and I have spent the past two Christmases at Food Bank-sponsored dinners (and will, quite possibly, again, this year), owing to financial hardship. Were it not for the generosity of people who openheartedly (and open-pocketbookedly) donated to drives such as Huron Carole, ours would have been a a lean and mean Christmas, indeed.

So, thanks. And Happy Holidays, everyone.

i got to The Music Hall around 7, doors opened at 7:30, had to sit through several very unmemorable performances by artists i had never heard of (i STILL don't know who the heck Tom Jackson is...) until Fruvous hit the stage around 9:50. I'm still slightly bitter about the fact that I had a ticket for the very front row, although someone was IN MY SEAT, and claimed to not have their ticket, blah blah blah, and since this group of people was rather old, the usher-lady didn't feel like making them want to get up in order to resolve the matter... so she gave me the choice of sitting in a portable chair on the very right edge of the front row (which would obstruct half of the stage), or sitting in a vacant seat along the right aisle halfway back (which i chose to do).

well, this is starting to look not-so-brief. :)

anyway, MF came on at 9:50, and played:
- message
- authors
- minnie the moocher (with toronto-related lyrics)
- today's the day...
- gulf war song (with the audience innapropriatly LAUGHING after certain lines... it was just plain CREEPY)


There was no way i could have gotten away with videotaping, since an usher (and later, an important manager-type-person) was standing against the wall right behind me for the whole show; so I just held the camcorder in my lap and used it to capture the audio. I had to leave right after their set to come home for a long-distance phone call, so if they came out for an encore near the end of the night, i missed it. :p I also could not find Marcus to get my card stamped...

However, on my way out of the theatre, as i turned onto the cold & dead-quiet street, I bumped into Dave, who was smoking. He initialed my fruhead card so that i could get a stamp for that night's show at a later date (not that it matters much THIS late into 1997...). He said that the live album is finished, and will be released in spring '98. It will consist mainly of material from New York (yay!) and Philly. However, they have not yet looked into the legality surrounding the inclusion of cover songs, so it's still up in the air as to whether Psycho Killer etc. will make the final cut.

Thanks to Christine for these: