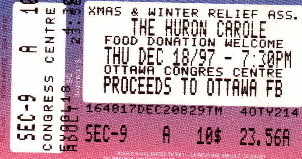 Well, never having been to a Huron Carole, I wasn't quite sure what to expect when you mix a playbill full of country musicians with Moxy Fruvous. The result was interesting to say the least, but let's get down to specifics.

Moxy's Setlist: Gotta get a message to you (A cappella)
My Baby Loves a Bunch of Authors
Minnie the Moocher (complete with Ottawa-specific verses)
Today's the Day That We Fight Back


They played first out of all the acts, immediately after the light humour intro by hosts Tom Jackson and Graham Greene. They were a little out of sync with the crowd, I figure for two reasons: It was demographically (for Ottawa) not a Moxy crowd, and most people were there to see the Country music acts. The guys were quite energetic and making great commentary in between and during the songs, but the almost full crowd was a little slow in getting with it. They kinda seemed like speedpuppies compared to the about 90% of the remaining show, and that energy was lost on a crowd when they ended up first in the show. Oh well.

The rest of the show was quite good if you're into Country music (which I'm not), with Canadian performers Duane Steele, Stephanie Beaumont and Patricia Conroy wrapping up the first half of the show. The only notable stage presence out of the three was Patricia Conroy, who actually did more than say: "That was ___ and this is ___." Before the intermission, Tom and Graham came out together again and engaged in some friendly joking around... including some free stuff being thrown out to the audience.

After the intermission, the first group was perhaps the best moment of the show -- in terms of group performance and the audience being clued in to what was going on. Presott Brown was a lively band, and their stage presence was incredible. The female member of the duo fronting the band (yikes, can you tell I wasn't paying attention during the intro?) brought out her daughter (who seemed in the 9-12 range) who sang an up-tempo "Boogie Woogie Santa Claus." The duo in Prescott Brown is from the Ottawa area, so they played the hometown crowd quite well. Definitely worth checking out.

Fred Eaglesmith came on before Tom Jackson closed the show, but at this point I can't remember much of his performace other than something about a yellow school bus and a song about "My girl has big hair." Tom Jackson closed the show with three songs from his own albums, Huron Carole, a Christmas Carol medley, Little Drummer Boy and Silent Night. There were two seperate standing ovations for Silent night, as the crowd attempted to guess the end of the song. After the first ovation, other bands started streaming on stage and the only Fruvous I could see on stage was Mike -- although my seats were in the "crick in the neck" section, and the right speaker blocked about 1/3 of the stage. The show ended with the whole whack of performers and audience singing Silent night one more time, which was a very nice touch for the end of the show.

I waited around for a bit after the show to see if any of the band would come out, running into Shilfiell and Kris from IRC (plugplugplug). We talked a bit, but there was a backstage party for the performers and invited guests, so not a Fruvous emerged before we left after about 20-30 mins. Too bad, both Kris and Shill wanted stamps.

An interesting show, definately a worthy cause and worth attending next year even if Fruvous doesn't play there...