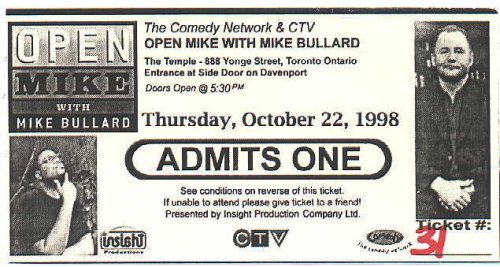 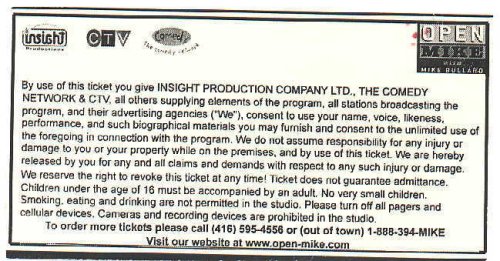 A sane person, on learning that Früvous was appearing on the Open Mike talk show, a 90 minute bus ride away, might not go if it involved skipping 1 1/3 classes. A slightly less sane person might conclude that the class is not essential and skip only what was necessary to get to Open Mike on time. Fortunately, I'm not very sane. (Everyone who's ever spoken to me just gasped in shock I'm sure.)

So, after sitting through Scottish Formations (37-363) and having absolutely NO clue what the prof was talking about due to my extreme hyperactivity, I decided to hell with it and hopped on the 12:10 bus for Toronto.

The ride went smoothly, aided by Alanis' second album "Now is the Time" and my worries that Chrissy would actually be driving up instead of taking the bus as she'd been planning. Once I'd arrived I wandered over to the Eaton's Centre in search of breakfast (chicken salad on toasted bagel), and Great Big Sea albums for Dante and leah. (Got 'em. Will deliver at NoHo as promised)

Missions accomplished I returned to the bus depot to read an anthropology textbook and wait for Chrissy's bus to come in, with or without her. I got kind of anxious when 4 buses came in between 2:20 and 2:30 and Chrissy was on none of them. Fortunately, bus #5 came in and brought Chrissy with it :) As I wasn't supposed to be in Toronto until 5:10 she was a bit surprised.

So we hung out, Chrissy had food, browsed through my Ottawa pix (were YOU at Luxor '98?) and arrived at the Open Mike studio around 4:45. Doors were still closed so we wandered around until we finally found (almost an hour later than he said he'd be.. obviously operating on Früvous Time) Mike Wood. Seconds later I spotted a dark-haired woman knocking on the side door of the studio... but Michelle doesn't wear clothes like that! Apparently Michelle does if she's coming straight from work :) They had informed her that doors would not open for a couple more minutes, but Mike (Ford) popped out to keep us company. (Or possibly to have a smoke)

On our way to the audience lounge before the show we spotted Dave with his guitar, and bumped into Jian who was looking for the makeup room. We chatted more in the lounge, doing some FruCon planning and speculating what the guys were going to play.. Dave without either banjo or accordion? Jian came back in to the lounge; we found out we'd been inadvertently babysitting his unfished diet Coke for him *g* He and Mike (Wood)had a long discussion about "What Dreams May Come", which neither Chrissy or I had seen. It was rather like being on #moxyfruvous when tech talk is going on.. time for private chats and let the techhies babble. (I mean that in the most affectionate way possible)

Heather arrived with her roommate and I must say it was great to see her again even though we didn't talk much :)

Then came my personal Weird Moment for the night. 3 guys came over, and one of them said, in an English accent "These are the Früheads". He introduced himself as Richard. Richard has been in Canada for several years, is a FruFan as opposed to a Fruhead (although he's thinking of heading to Point Claire) but still has his English accent. Before he said he lived in Toronto I was wondering if Richard Butterworth had heard about the show and come to watch!

Jen and Jo arrived after Mike (Bullard)'s monologue and got yelled at (with several others) about not being there to save some of the lamer jokes. Rick Green is way funny, the magician was decent.. but Our Guys were what we were waiting for. They didn't disappoint.

All dressed in black (including a black hat on Dave), they played a totally AWESOME rendition of Sahara. To quote Mike Wood "not extended, sounded like an LP version of the more rocked-up Sahara w/ blazing Dave-guitar". They were asked to choose two "talkers", which gave several Fruheads the giggles. Jian and Murray were elected.

They proceeded to dis Dave and Mike,(Well Dave is smart but he's a mute.), Americans (They're not very discriminating in their tastes.. they think we're good. They drool sometimes) and Rick Green (This is our interview. You had your time). When Jian got a bit incoherent (sorry Jian that's what happened) Mike Bullard dived in for his own snarky comment.

Dave and Jian hung around post-show, thanked us for coming. I actually managed to introduce myself to Jian (In classic Nafs style.. "Do you have any clue who I am?" yeah yeah. Did you really expect me to do it gracefully?) He got a sort of fond look in his eye when NoHo was mentioned... the same kind he gets when the music is going really perfectly. He told us "You won't get anything out of me" but that the Iron Horse shows are going to be special. As if we weren't excited enough. Still won't confirm/deny that the band will be in costume. Showed him "The Gospel According to Fruvous".. apparently Jude, bless her heart, printed it out for all of the guys, but for the record Jen, he loved it.

This wasn't one of my more inspired "reviews"... I hoped you enjoyed it anyway.:)