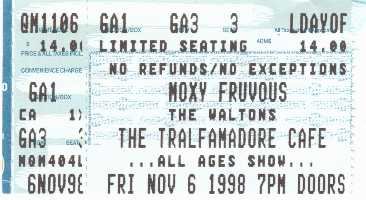 I'm coming out of lurk mode to briefly tell a bit about this weekend with the shows at the Tralf. I have already seen a few in-depth reviews so I will just mention a bit.

I think the Buffalo Fruvous experience worked best if you got to see both shows- Friday night was more of a mainstream night, whereas Saturday was more obscure and gave the well-rounded FruFan an enjoyable weekend :-)

Friday was PACKED with people of all ages. It reminded me of when I took my parents and my 11 year old brother to see the band at Tramps in March of 97. The show was great- although I think the guys looked a bit tired- but they did enough of the songs we've come to expect with a few nice additions. This was my 10th Fruvous show and with the exception of one in-store, it's yet another concert where I heard songs I hadn't heard before live. This night, it was a full version of It's Too Cold and Nuits De Reve. I had always hoped to hear the latter live. It's also always nice to hear stuff like Laika and Marion Fruvous, which I also had not heard before.

I managed to drag my poor car back to Fredonia by 2:30, just enought time to pick up Greg, a recently discovered Fred-fru-head, and get on the road again by 3:15 ish. Initial plans were to pick up some tix for the Sat show and then find some chow before the show. HA!!! We got to the Tralf at 4:00 ish and found that we weren't the first to arrive. So we stayed and chatted (caught up) with Andi (Mom!!!), Kim and Kris. Fru heads started to slowly trickle in around 5ish and I was so happy to see faces I hadn't seen since Fru MIles weekend and start placing faces to all you wonderful people on the NG.

Doors opened at 7 and I quicked got my frucard stamped before joining Kim up front stage Jian/Mike. Waltons opened again at 8 and played a more high energy show then the previous nite. Very nice. Our heros graced the stage around 9:30 and played an amazing set full of firsts for me. Started with Message (my second fav opener). I finally got to hear It's too cold, No No Raja, Laika and Nuits de Reve!!!!!!!!! *happy fruvous bouncE!!!!!* hearing KitA and Right Wing Shit was a special bonus...haven't heard them in over a year. Also heard (a bit) of Girl from Iponima (sp?)!!! WOW!!!! New song for me was half as much...I hope I'll be able to more of this one!!! The running gag through the whole nite was the feud between the balcony dogs, standing cows and chickens, and the seated rich..all of whole had their own calls which Jian promted us to call out every now and then. Biggest treat of the night (both nights)...real piano on stage!!!!!!!!! Horseshoes and Boo Time we extra lovly with this!!!! Way to go Dave!!!!!

Friday night... arrived with the Entourage outside the Tralfamadore Cafe, met up with the other Entourage, and were let into the club without much of a wait. The Waltons put on a great set that lasted around 40 minutes, and were followed by Fruvous at around 9:15 without too much of a delay.

The back of the stage was shrouded in a black curtain covered with white Christmas lights that would be turned on/off at certain key points during songs, much to our (and sometimes the band's) amusement.

A great set, similar in feel to the fall '97 tour... the Tralf is truly a wonderful place to see Fruvous.

Thanks to Jeff (Gobo) for this one: