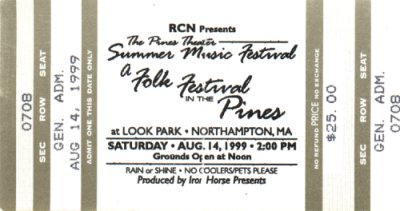 Vika and I left Boston at 10:30am and made it to NoHo by 12:30pm. There we met up with Zard, Chris T, Jason and Kathryn. After getting settled inside the festival grounds, a bunch of us (Jason, Kevin, Vika, Rob and me) headed back to the town center for sushi (yum). We made it back just in time for Susan Werner's and Vance Gilbert's set. I sat in the shade for most of this, to keep out of the sun, with Jo Janis. Hellos also go out to Lisa, Miriam, Tom, Josh/Lisa, Loren, Nate and many others...

During the dinner break, I stayed hunkered down at the main stage. The clouds were looking quite ominous, and rain was pretty much guaranteed. :-( Christine Lavin, Ellis Paul and Cheryl Wheeler were next, amidst downpours at some points and light drizzles at other points. Everyone got very wet, but everyone stuck it out and hung around.

By the time Fruvous went on (8pm or so), the rain had subsided (thank god). People stood up to dance, and Moxy played a great set - about an hour in length. Dan Bern followed - he also played for about an hour, having Fruvous join him on his two last tunes. After that, a handful of the artists from the day (incl. Moxy) joined together and did "I Shall Be Released". Very cool.

The festivites were over about 10:15. Fruheads milled around, talking to Jian and Mike, and catching up with each other. Some went to Fire & Water (in town center) to catch some other band that was playing; Vika and I stuck around till about 11:30, got some pizza, said our goodbyes and then headed home. We got home a little past one in the morning.

Good fest...GREAT lineup...the first one, and here's to many more!

I had no idea that this was the first year for the Pines Fest, but I hope it won't be the last.

There honestly wasn't a low moment; but for me, the highlight of the first half was Vance stepping off-mic to sing a song about a man and his racing piegon, a stunning performance.

Thunderstorms had been threatening all afternoon, and the skies opened up during Christine Lavin's set. She was very engaging and a lot of fun to watch. Unfortunately, it became very hard to pay attention what with trying to keep ourselves and a couple of people's taping equipment dry. The rain let up, but started again during Cheryl Wheeler's set and about six of us crowded under two umbrellas. My new best friends in the world are AdamH, Jason, Loren, Melanie, Nate, Kevin and leah. We huddled under a tarp held up by Jason and Nate's mic stands, anchored by my backpack on one side and by me on the other

By the time Fruvous came on, the rain had miraculously stopped. We had all kind of figured it would. I headed down front, and was very pleased with the sound. I was about a person and a half back right in front of Dave. Turned out to be a great spot.

True to form, they took the stage a little late, joshing us about being People of the Rain. "No no, People of the Damp!" said Dave, and Mike took off using that on about a minute's improv. He had the megaphone and that could mean only one thing: Michigan Militia. Nice speed, high energy, the guys were definitely on after a slightly lackluster set the night before in NYC. Jian mentioned the beauty of the setting, and how much Northampton felt like home. They all seemed much more relaxed.

Jockey followed. Shades of Live Noise! It had been a while since I last heard this one. Dave had the accordian workin', the bass sounded great and Mike's vocal was wonderful, as usual. Everybody seemed loose and willing to play for us. The crowd was very into it.

Careful was next, I think in the same spot as the previous night. A consistently good version, I like it coming behind the up-tempo Jockey quite a lot, makes a good transition piece. Lots of energy. It was about this time that I noticed steam coming off Dave's head. Mur did the intro and Dave pointed out that people say "you can't be too careful" as an admonishment, but that this song meant exactly the opposite.

During the interlude between songs, Jian noticed the gnomes and made a few remarks. Mur noticed that everybody's gnome was doing something except his. "It's a landowner," says Jian. "Ooh! segue!" (was that Dave or Mur?)

Anyway, They swung right into Boss. Dave was a dancin' fool the during Boss. He and Mike did a sort of jig, then later he sidled up to Murray and they had some Temptations moves goin' on. Jian mentioned that he hadn't seen that kind of choreography in Boss in a while.

As Mike started noodling around with the acoustic, there was much cheering in the crowd, and Jian remarked that we were cheering because we were hoping to hear some Gordon Lightfoot. I knew they wouldn't pull out Early Morning Rain at this point in the set, but was surprised when Mike broke into Gord's Gold, completely unscripted. The crowd went nuts, and they extended it into some of the melody of another Lightfoot tune for a little bit, pretty cool.

Earthquakes followed. Earthquakes! It was laid back, with the banjo--yes, the banjo. This was a banjo night. Dave's vocal was great, rich and expansive. I wasn't sure how well Earthquakes would translate after hearing it on TH, but the vocal and the banjo make it a great one. I so love this song.

Througout the night, Murray talked about how his cable was in a puddle, and that if he were "electrified" that would make for an interesting show. After the crew dried the puddle, he said he was going to change into metal socks and shoes in order to maintain his chances. Mike said that when he was a kid, he was going to have a band and their first song would be "Juicified and Electrified" with sort of a Hendrix riff, so Dave, at the keyboard, starts playing a Hendrix riff. Mike held the acousitc behind his back and pretended to play it with his teeth.

I'm missing songs here, I know they did a nice IWHO. It's the single, and I really like the recorded. I think the lack of backing vocals help to distinguish it from Sad Girl, and I love that Dave's harmonies are mixed up.

If Only was pretty standard. I started thinking about what some people have said how hearing that song makes them feel like they're overhearing a phone call or some such thing, but what if it makes Mike feel better to sing it? I think that has to be what's going on. Put the song in much better perspective for me.

We got a Tureen-Sauce in there, too. Quite up to their standards. Dave remarked that he had to be polite because he was Canadian. Well, it's true!

I know I've complained about King, but I really enjoyed it Saturday. Like the whole show, it had good energy. At the "epilogue" break Dave started dancing and continued for a bit as Jian and Mike sang "you've got the music in you" and Mur exhorted him to bust a move.

It took him a second to recover his voice fully as he asked if we wanted to know about the epilogue. Dave was having such fun during the whole set. Very cool to watch. Splatter^2 followed King, and I think it'd be interesting to hear that without an intro between. It was an intriguing segue.

They closed with Dancing Queen/Walk on the Wild Side, which I hadn't heard in a while. Lou mentioned the gnomes, and how he couldn't talk about what he was thinking about, which involved the gnomes and petroleum jelly. Excellent choice to close the set.

Fruvous was the only act to come back for an encore, which was Early Morning Rain. Very nice indeed.

The guys joined Dan Bern at the end of his set for Marilyn Monroe, which they did several times at the beginning of '99 in NYC. Dave did some nice keyboard work, the whole thing sounded great.

In contrast to the closing song at FRFF, which was a little lame IMO, the Pines Festival closed with a stirring I Shall Be Released. Dave did the first verse, Ellis Paul the second, Dan and Pamela Means did the third verse. Mike's solo on the electric was quite good. Dave was funny as they were taking the stage and plugging in; Pamela strummed her guitar and he said "Ooh! In tune!" This was, by far, my favorite ISBR Fruvous has done.

The Pines Festival was a complete success, despite the rain. We didn't really care how wet we were by the time Fruvous started. The Fruvous setlist was an excellent mix of new stuff and old favorites, and I actually thanked Jian for a good setlist after it was all over.

Here's to more shows in Northampton. Kudos to the crew, all the musicians and the audience for maintaining good nature during the rain.

In ISBR, the second verse was sung by Mark Errelli, who did a wonderful job; Ellis Paul wasn't even on stage.

From a weekend paper advertising the upcoming NoHo Folk Fest:

"...the four quick-witted and impudent members of Moxy Fruvous [sic - no umlaut], who do high-energy rock and roll."