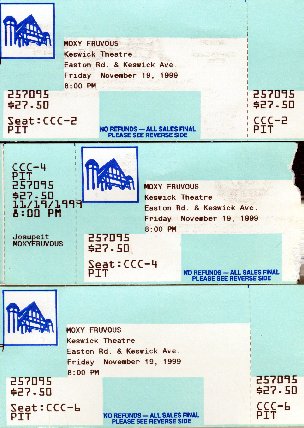 Hey, everybody, since no one seems to have done a review yet (or it just may be my server), I decided to take a shot at this whole reviewing thing for the first time... be kind, please!!!

If I had to describe this show in one word, I'd probably have to say, "Wow."

So, after a fairly uneventful drive to Glenside (which reminded me as something of a cross between Fort Lee, NJ, and NYC for anyone who's been to both locations) with my parents, we parked, and ate at a Chinese restaurant right next to the Keswick. Apparently, 75% of their business that night was coming from people who had come to see the show. We headed on over to the theater around 7:50 (10 minutes before the show was supposed to start), with me all excited, as this would be my defruginizing show.

She was there with her band. Sarah and her guys had a wonderful, amazing sound, but as most of the audience seemed to think, she's got a ways to go in performance style- she managed to bore about a quarter of the audience, it seemed, by the end of her set. People listened politely, but some of the quiet moments in her songs were marred by the low rumble of talking that was coming from the theater lobby and even sometimes from the audience itself.

After a 15 minute break and a trip to some *very* smelly bathrooms (which I'm sure none of you needed to know ; ) ), we headed back downstairs to be completely blown away and surprised with Blow, Wind, Blow (I think. I don't think this is what it was, but all I remember was that it had the words "judgement day" frequently in it- that's what a quick search on FDC brought up.) Anyway, the point is, the theater became pitch black dark, and then, all of a sudden a beacon of light (otherwise known as spotlights

Here are some highlights (as this review seems to already have become fairly long-winded):

~By now, guys were all up on stage, and after a few comments, much of which I don't remember, launched into a very energetic rendition of BJ Don't Cry. Actually, the whole show and the atmosphere was very energetic (and there really is no other way to describe it), with the guys feeding off the enthusiam of the audience and vice versa.

~Throughout the early part of the show, they commented on their appearance on Good Day Philadelphia and WXPN), and the fact that nobody really knew them. At this point, the guys began to tell the "truthful" versions of the meaning of Moxy Fruvous (much of them which were pretty hilarious and led into a Dave = superhero banter... but I unfortunately don't recall because of lack of sleep). When it came to Murray's turn, he stumbled for a story, saying,

~Definition of Moxy Fruvous led into a very amusing (for me, since I'd never heard it before) rendition of Marion Fruvous, complete with horse-riding sound effects...

~I was very surprised to hear Pork Tenderloin and Homeward Bound, and let me say, both renditions of them blew me away....

~Jian tried to keep from making a very lengthy intro to IWHO, but it turned out to be lengthy nonetheless (not that it was bad or anything), complete with a synopsis of Love in the Time of Cholera.... but a very serious intro turned slightly humorous with a comment at the end:

~ Disco VB- a wonderful surprise for me, with the intro, Jian- "Sometimes a guy just wants to dance..." Much of the audience was dancing at the front of the theater by the time we were halfway through the song. They stayed up there through the next song until people screamed "Sit down!!!" Apparently, they had been blocking some views, I think. To paraphrase Jian, "I guess we'll just leave you to an inter-audience rivalry... we'll just keep playing..." which lightened up the somewhat tense atmosphere.

~Boo Time- local references galore, much of which I don't remember... sorry! : (

~River Valley- they launched straight into this after one of the Dave Songs.... which one, I don't remember, but it sounded great, the way they did it.

~Get in the Car- another fun song which had the audience dancing.

~Psycho- Jian got the audience clapping to the intro, but it took 3 tries to start the song, at which some point someone cried out "You're such a tease!!!" Every time Jian stopped, a group of lights went out, which had a very nice effect, I thought.

~Drinking song- great FruMoment, but it felt like most of the people who knew the lyrics were sitting way up front or a little further back...

~Some other notes of interest: at one point, Mike teased us with a clip of Jenny Washington, though the whole version wasn't performed, and Dave singing the Sesame St. theme was VERY amusing (which is why I've been saying that I think the guys would do wonderfully if they did a performance of musical guest-stars on the show...)

It seemed to me that there were a LOT first time FruConcert-go-ers in the audience... at one point, one of the guys asked something to the effect of "For how many of you is this your first concert?" and quite a few people seemed to raise their hands....

Also, apologies if this is anyone on the NG, but some girls were hurling their glow-in-the-dark necklaces/bracelets at the guys during a quiet moment before the end of The Drinking Song... I don't know how the guys felt about this, but it certainly ruined the moment for me. Other than that, the audience was pretty pumped up, yet respectful to everybody for most of the show...

As to that whole language/banter issue, it seemed that the guys were a little tamer than what usually seems to go on.... as Mike reminded Jian, "They didn't pay to hear you tell them 'F*** off.'" My parents loved ILMBoss, and enjoyed most of the banter.

I don't have a setlist, but this is what I remember off the top of my head. (I'm sure someone who did slither for a setlist will post it, right? *hint hint*

*NOT in exact order*

Hope I've given a coherent review that you've enjoyed.

PS- Did anyone make a tape of this show? I might be interested in doing a B + P deal eventually, but I'm not sure if the blue "No Taping Per Artist's Request" on the Keswick's doors were applying to MF....

Hi All! This is Robin a/k/a Robinkat (using Tim's name w/his permission!) I don't usually post here, but I did write down the set list last nite, so here it is:

Well, here you are folks - this was my first note-taking & posting. It was such fun trying to write these tunes down in the dark & read them back this evening. Doing this well after the show has brought it all back into reality! The three of us truly loved the show!

I (robinkat) have many thoughts regarding this show - having only seen only four shows to date! They played long & they played great! 24 tunes (not counting the banter tunes) and didn't quit until 11:30. If you've got any questions or queries - just ask me. (But please don't ask me in the news group - i don't frequent this!) FrüMessage me, or look for me occasionally at the IRC Cafe' . . . Robinkat

~Boo Time- local references galore, much of which I don't remember...sorry! : (

I got a set list :::HUGE GRIN::: so I have the local references.

Just thought you all might want to know what they were.

Thanks to Kat for these: