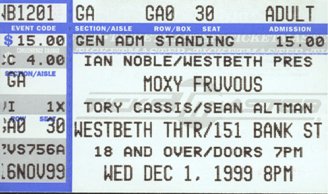 Ok, i know most of my reviews are extremely long-winded but i'm sleepy - i have class in a few hours so i'm gonna make this as short and sweet as i possibly can (still doesn't say much).

Aside from the fact that it's extremely cold out today, and i'm incredibly sick (aw puddin) - i still decided to trek the mile and a half in the cold to the show. Thankfully Jill agreed to walk from NYU down to the show and kept me great company. Today's Voice had the same Fruvous ad as it has the last few weeks except that there's a big bubble that says "Tonight and Thursday!" plastered over the picture. apparently there's a dismal review of them in there but i must have skipped over that this morning while looking at it.

When we arrived there were only a few people in (no, not on) line and one of 'em was a TMBG fan come to check out Fruvous. (yay!). Perhaps he was there along with the other tmbg fans that were there to check out opener number one...

SEAN ALTMAN: I remember the days when the chick (nancy?) that is in charge of his website used to post to the TMBG mailing list claiming that we'd all love Sean Altman's work.. yaddayadda. I always saw her as posting irrelevant crap to the list and then cheaply plugging sean's site. Anyways, i'd heard a few mp3s of his stuff before the show and though he sounded like a mix of New Kids On The Block and Andy Partridge (of XTC).

Anyways, i was throughly impressed with his set - i'm totally all about his music now (and no, it's not because he gave us all chocolate when he came out!). The highlight of the show was when Jian came out and sang with him for "town." it was pretty funny cuz jian didn't really know all the words and was just kind of following sean's lead. Checked with his cheat sheet a few times. it sounded really groovy tho...

TORY CASSIS: Arrived on stage claiming he was "the extremely late Tory Cassis." He looked like Jason Lee (as jill pointed out) a bit which was entermusing. I really like his work. it was very nice. Murray was the guest star for this one and was "funkin" damn well :)

FRUVOUS: Well well. apparently the boys all arived on stage in the exact same clothes they wore on monday.... except i guess jian changed his pants. which may i comment - i think this was the very first frushow i was ever at that jian *wasn't* wearing tight pants. anyways... I'm going to post the setlist and stay away from the banter until i listen to a copy of the show... It's not that it's not worth commenting on - just not as *excellent* as it has been in the past.

all in all an amazing show. i chatted with a few of the lads aprčs show. It was actually the first time i ever even approached murray for something other than an autograph. conversation with him was nice - Tory Cassis joined in the conversation in a rather crude yet highly entertaining manner "i haven't done that since i was in 7th grade" Mur: "i know your type - you did that last week!". Ji made my night singing a little ditty to me (always proud my name is jordan*grin* sorry...) :) (and to jill and anita... *grin* no comment but i'm sure you know what i'm thinking!)

to all the fruheads i met (and re-met) - it was a total blast, i hope to see you kids tomorrow night and if not - make sure you e-mail me and say "Hey hey!" I really dig the fact that there really is a "fruhead community" on the east coast. It's so much different than the CO shows (not a bad thing - just different). I really enjoyed it and can only hope for as much entermusement tomorrow! :D

You already saw the setlist from Jordan's review, so I will only rehash that when it's relevant.

Hey to everyone I met last night btw!

It all started when I met up w/ Jordan at her dorm, and we walked over to the Westbeth. It was a cold hike, but that's always a bit more bearable with a friend. : )

Sean Altman's set was really fun, and Nominology is real, dammit!!! ; ) It was really fun when Jian came out for Town, and the song sounded great, cheat sheet or no!

I can't eat chocolate, so Sean's bribery of Hershy's miniatures didn't work on me. It wasn't necesarry though- I enjoyed his set. ; )

Tory Cassis's set was really good too. I asked him about a strumming pattern in one of his songs after the show, and he was very gracious about my question. (I didn't have a doubt he wouldn't be, but it was still pleasant to find out.)

And now, the Fruvous set notes:

Dave managed to break a string in the first song. I was impressed. After the song was over, he talked about how he kept hitting his head on the microphone. This led to a banter about how the sound that hitting his head made could actually work in the song.

Jian talked about the fortune cookie fortune he got (which escapes me at the moment), and after he read it, about half the audience (including myself ::grin::) shouted out, "IN BED!!!!" Everyone cracked up. Murray read his, and everyone said it again. This was very funny because it was something to the effect of "You have keen powers of observation." Mike picked up on this and said, "You have keen powers of observation...and a papercut."

They played Laika. This isn't a note, really, just a comment because this is one of my favorite frusongs. It was a treat.

They did this cute Westbeth improv which included audience participation. There was a really funny bit in the beginning, but again it escapes me.

Murray started to introduce the Kids song with a "Where Fruvous got their name..." that obviously took the other guys by surprise. It was cute anyway. Cuter still was the Kids Song itself...I'd never seen it live, and Mike and Murray's childish antics had me cracking up. Jian was trying to bully Murray, but it didn't work very well. A very cute song, plain and simple.

Minnie the Moocher included bits about the riots in Seattle, the lighting of the Xmas tree (which no doubt made some people late last night), further calling Guliani a fascist, and of course, railing on George W.

Tory came out to sing Jockey Full of Burbon. It was cool to see him again...he was dressed very snazzily, a fact I forgot to mention above.

I believe Jordan got the rest of it....

At one point someone yelled out for "Pico the Bandit Fish." I thought Jian was going to throw something at that guy. (regardless of gender, anyone who says something like that deserves to be called That Guy.)

All in all it was a great show...Can't wait for tonight!

(btw, that was my first review...apologies if it wasn't that great)

See you there tonight, whoever's going!

Well first off getting there was an adventure in itself. I was driving in NYC and the directions were all good until we had to find JOe DiMaggio Hwy. And the funny thing is that there is no Joe DiMaggioHwy. Apparently they either changed the name of Joe DiMaggio to West or something else...I don't know. So after we figure this whole dillema out we finally find Westbeth Theatre. My first impression of the place was "umm, sketch..." I found a parking spot an dheaded inside. By this time it was around 8:30 or so and the show started at 8. It's all good because they had 2 opening acts. We get inside and it is a really cool, intimate joint. We missed the first opener, who seemed to be pretty cool and upbeat. The second opener, Tory Cassis, was a little more mellow and kind of brought me down before the show, but finally Moxy came on and started with Down From Above. Awesome! It's club was really awesome because it was just close and intimate and anything you said was really awesome because anything you said could be heard by everyone (which was kind of dangerous considering Amy and Laura would be talking about people really loudly). But they played "The Kid's Song" (great! loved the way the lads acted like little kids and everything!), "Get in the Car", "The Drinking Song", and many more great ones that I can't think of right now. Oh and we met a really cool chic, Jordan, who is a major FruFan like us, even more so actually since the lads know and always recognize her. She is a freshman at NYU and totally awesome. We had conctacted her through AMMF and told her we wanted to meet up with her at the concert and she was really chill. It's awesome to be able to talk to someone you can really relate to and who isn't really stuck up because they discovered Moxy Fruvous before us. Anyways we chatted with Jordan for a sec before the concert just to introduce ourselves then we caught up with her after the show and talked to her for a bit. We are most likely taking her to Canada with us for FruCon. After the show we waited around to hopefully meet the band. Jian comes out finally and we're all like, "Holy shit!" Laura and Amy push me up front to start off the introductions and of course I'm all nrevous and so I'm all talkative and babbling. But Jians was very cool about everything and gives us all autographs. He was so cute when he asked how Amy was doing. I think it totally made her night! So after all that we are like well I guess we should drive home and try to catch some sleep before classes. Gwynne was really out of it and Laura and Amy had permanent smiles on their faces from just meeting Jian. I can't really describe how I was feeling. It was a mixture of complete contentment/excitement/exhaustion/anxiety (I had a Calc test at 11AM and it was like 2AM)/sadness (because I couldn't stay longer)...pretty much the whole spectrum of emotions. We made it back alright even though I started hallucinating and having major headaches about 2 hours into the drive back. I gladly gave the controls to Gwynne while I passed out sitting next to her. Overall, the trip was definitely worth it and I could see myself going to NYC more often, maybe to chill with Jordan sometime. So that's my review for the show I saw on Wednesday. I'll let someone else fill you in on the next crazy 24 hours.

Thanks to Kat for this one: