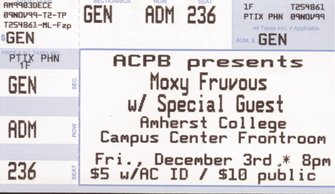 What an amazing show.

Vika and I left Norwood around five in the afternoon and really didn't hit much traffic on the way to Amherst. We made it there by around 6:45. Found the student center no problem, and once inside started running into familiar faces. I'm not even going to attempt to list all of the people that I ran into at the show...you know who you are. ;-)

I was feeling kinda sleepy before the show, and not really wanting to deal with the crowd. As a result, I kinda hung near the back by the soundboard where there was a little more room to breathe.

There was no opening act, even though the tickets said "with special guest". Fruvous went on around nine, and delivered a wonderful set full of improvs (including a huge 'Little Prince bit which involved a boy from the audience 'strutting' up and down the stage) and impromptu songs (some Beatles' tunes and such). The guys seemed freer than I've seen them in a LONG time. The set last about 135 minutes and was just full of surprises as well as a good mix of old standards. I thought the performace of Ash Hash was amazing, BTW. Dave was sick, so as a result, his voice was suffering...feel better, Dave! :-)

After the show, a bunch of us hung around the venue until around midnight, when Vika and I headed back to Norwood, getting home by a little past two in the mornin'...yuck. :-)

This show was definitely like a breath of fresh air...looking very much forward to the upcoming NoHo show.

Thanks to the overwhelming kindness of a fellow fruhead who didn't even have a ticket to attend the show (Thank you Jake), I arrived at Amherst just as the lads took the stage.

[Note: KingGEH & Lose That Girl where never actually performed- whether this was due to Dave's sickness or the *incredible* improvs is undetermined]

-- Since there was no-one to open for them the lads picked a young boy from the audience to do it. Jian pulls this boy up to the stage and as he's telling him what to say the boy is like "Yeah, yeah whatever I got it covered", and he just belted out "Ladies and Gentlemen: Moxie Fruvous".

-- Before If Only Jian says something about how at the NY shows earlier in the week people had been whining to him about not being able to get tix for the Amherst show. And because of it being such an intimate venue (200 capacity according to Tobey) that the unmarried members of the group, like Mike, thought that it might be a good night to meet their future spouses. U-Mass Amherst obviously being the place to meet intelligent, attaractive, educated, *rich* people. Jian asks Mike something about him agreeing and Mike answers "Well, I met my wife on a Friday." To which Murray replies, "Tonite's a Friday, so it's your anniversary of sorts." Mike: "Hey, honey I was do you know what day it is. No? It's our weekly anniversary."

-- A very long tangent about the protests that had been staged at U-MASS schools earlier in the month to protest outbreaks of violence on campus. Murray's "Go U-MASS!"

-- The examples of three different different kinds of bosses before Boss.

Murray: "I want you to drop and give me twenty."

Murray: (with that ' what an idiot look on his face') "Twenty push-ups" from *somewhere* in the audience: "Do it!"

-- Jian commenting on how this crowd was his favorite crowd in a while. I can only shake my head and wonder what drugs the boy was on... Nobody was moving, at least 1/3 of the room knew none of the words. I dunno, maybe it was better towards the front, but Debs and I were stuck in the back where our (specifically my) dancing was blatantly stared at and made fun of at least once.

-- Before splatter the differences between Americans and Canadians banter. Americans love those gory-bloody horror movies. "And we're glad you do."

-- After Splatter Mike continues the conversation about the differences between Americans and Canadians. Some banter about how it's becoming more acceptable to admit to having smoked marijuana in the US, but it's still taboo. A story about the Prime Minister of Canada who admitted to smoking up often. Mikes impression of said Prime Minister upon entering the country and being being barraged by reporters about wether or not he had ever smoked marijuana-- (all wide eyed and porper sounding) "In Canada?" ==> Jian's discussion of how his Middle Eastern family gets together on the holidays and how the opium they do gets the conversations going ==> Ash Hash

-- Jian before IWHO "Here's a love song from our new album Thornhill." And that was it. Say what????

-- When they pulled the same boy from the begining of the show back up to the stage. Something about "The little prince" and how the little prince was like Alice in Wonderland and on mushrooms. Dave: "*Sitting* on a mushroom, of course." Mike: "Tobey, can we get the boy a giant mushroom?" This kid was incredible he strutted across that stage like nothing I've ever seen before: Jian better watch out or this kid just might take his place as biggest ham on stage.

-- The jam with Tobey. My god! That man can work the bass; I was impressed. No really, f*cking amazing... and later (maybe during bootime?) "Fruvous plus Tobey is the buttermilk five")

-- The "another bites the dust" improv -- or whatever that would be called -- that seemed to have replaced King/GEH. I can't believe they played that.

The lads seemed really into the music and really into the crowd, but it was obvious that they weren't feeling very well. Musically the show wasn't nearly as tight as normal. Dave barely said a word all night. I found their perpetual mock Brittish accents to be highly entertaining though.

* I got my first ever set list; due only to the fact that nobody in the crowd seemed at all interested in retrieving them post show; I snagged Murray's to give to Deb also.

* The look on the faces of the girls who had been standing behind us and making fun of Deb and I, when between songs Tobes locked me into a bearhug lifting me off the ground and swung me around. Heh!

* Tobey on the bass; Rock On Tobes!

* ^kat^'s "Sexiest Man Alive" magazine cover. Girlfriend; I would *love* a copy of that.

* Being hit on the shoulder with a sharpie... to the guilty party I say only that there is another letter forthcoming, just wait.

I've never written a review before because I thought that I could not possibly find enough to say. And now maybe I've said too much. But I hope that at least some of you have enjoyed reading this, and if I get enough positive feedback maybe I'll even try it again sometime...

This has to be really quick for now because I have a band function in 20 minutes ::groan:: but I wanted to share some cool things from Amherst. The music itself..AWESOME. I was really happy with what they played. I don't remember everything but among them were Half as much, Independence Day, Horseshoes, Pisco Bandito, If Only You Knew, Sad Girl, I Will Hold On, Johnny Saucep'n, Bargainville, Michigan Militia, Splatter Splatter...awesome stuff. I can't think of others right now and plus I'm wicked tired. Anyone else who was there care to fill in some more?

Jian messed up a little on his tin whistle part in Johnny Saucep'n and shook his head a little, but it was good anyway. Intro to that was something about loving food, and us being the anti anti-food people. In honor of people who love to eet. Eet, eat. ::shrug::

Jian started talking about the difference between Canadians and Americans, and he said something to the effect of while he can identify with a lot of them, there are just some that you don't find as much of in Canada. The type of people who love to see spurting blood from dying teenagers, naturally leading into Splatter Splatter.

Didn't get to meet anyone unfortunately, band or otherwise, because my friends and I had to split. As it is we got home about 12 and have to go out in the freezing cold to play at a football game soon. joyousness.

I'm forgetting a lot that I want to add, but it'll have to wait. I'm gonna get going for now, but it was an awesome concert, I thought, and I think my friend Aaron is now officially hooked. :) Yay! Plus my friend Katie bought the B album! Whoo hoo! See ya all later!

Thanks to Alison for this:

As printed in the "Verbatim" column of the Winter 2000 "Amherst" alumni/ae magazine:

"Our New York fans were really disappointed when they heard that they couldn't come to the [Amherst College] concert tonight because it's a closed event. They thought that was really elitist and selective, but Amherst students wouldn't know anything about that--would they?" --Moxy Fruvous band member Jian Ghomeshi At a sold-out concert in The Frontroom, December 3, 1999