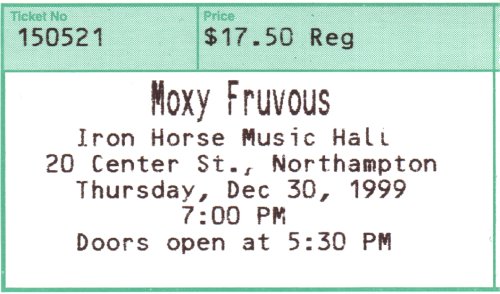 Vika and I left for Northampton around 2pm, and we got there by 3:30. We didn't know that doors were so early (5:30), so we thought we would be way early. Turns out there were already some crazies in line...so we joined them! :-) Michele Determan met up with us not too much later, and we pretty much got into the venue around 5:30. Vika, Michele and I took a place up in the balcony so we could relax during the show.

There was no opener. Fruvous went on stage around 7pm and played for about 2 1/2 hours. What a set...highlights for me included Nowhere Man, Believe, pulling songs out of the hat, Bed & Breakfast (my first time hearing it live) and the world facts from the truckstop placemat...FUNNY stuff.

Fruvous made the concert so enjoyable for me...I just didn't want them to stop performing. Finishing off the night with an acoustic Drinking Song singalong clinched it for me, and put this show in my top 5 easily.

Afterwards, we hung out for a while, talked to the lads, tried some hoola-hooping, and just chummed around with other fruheads. Lots of surprises as far as fruhead turnout: Doug Levy, Chris Traugott, Caitlin, and many others. It was great seeing people who I don't get to see that often since they live so far away.

Vika and I headed out around 10pm and got home by midnight. What a great show. I'm not sure when I'm going to be seeing everyone again, since I'm not planning on trekking to Toronto this year...but I'm sure I'll see everyone soon!

The NoHo show was my 2nd ever!

(thanks to the NG for helping me secure tix)

I had a lovely fabulous time, met a lot of fun and interesting people too! Anyways, apparently the show had much much more Murray songs than normal. The crowd was highly mellow, and the setlist seemed fairly laid back too.

Don't know if this is new, but they came up with, "We don't know what we're going to play next but the audience does" This was 50-60 song titles in a hat. ("All we know how to play minus the 5 or 6 we're sick of) An audience member then came up and chose a song out of the hat! I remember "Jockey Full of Bourbon" and "Splatter, Splatter" were two of the four chosen.

During the second encore, the band attempted to play "Entropy" but gave up because they couldn't remember what key it was in... so they switched to a "Y2K Compliant" version of the Drinking Song... Acoustic! The audience sang quiet enough that you could still hear the band... :)

It was a very nice show, seemingly rarer songs, tho how should I really know? :)

I thought somebody posted this, but since Neil hasn't seen one...

(As transcribed from Dave's setlist, which Adam snagged for me.)

(1) Incredible Medicine Show, as drawn from the hat

(4) Jockey (There was some discussion as to which order to play these, Mike insisted that "we" could just go into Indy from Jockey. Dave said "well, *you* can, but I can't." Actually, "we" couldn't have either, as Mike had to switch between acoustic and electric. In the end, they played the songs in the order they were drawn.)

(5)Tears of a Clown, much closer to the English Beat version than the Smokey Robinson version

(6)King/Green was not played; Drinking Song off mic, the Y2K version, as Jian called it.

The guys were loose, definitely having a good time up there. The crowd was terrific.

Thanks to Gordon for this one: