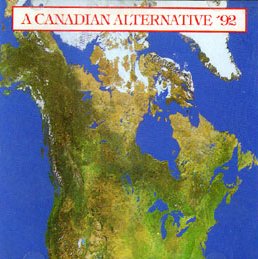 Moxy Fruvous: This contribution comes to you from a quartet with more than enough juice to fuel Audrey McLaughin's annual pan-Yukon Ski-doo regatta for another two years. The Fruvous boys are aspiring to add their spice to the emerging Canadian music scene like so much chopped garlic in a big fat wad of ground beef. They are wistfully anticipating translating their prospective success into an appearance with Regis (of Regis and Kathie Lee) 'anywhere, anytime,' and as the four sons of Robert Urich on the return of TV's Vegas$. 'King of Spain' represents just one style of the multifaceted Fruvous repertoire that is otherwise augmented by political satire and elements of musical theatre. MOXY FRUVOUS is proud to be appearing on the same compilation as Carole Pope and hope that this is just one more step towards a future joint-release with the Pope.