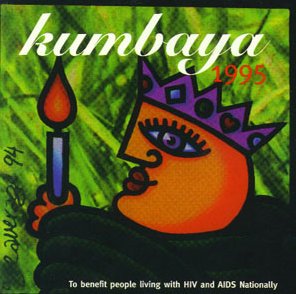 
This CD is the result of an AIDS/HIV benefit concert released by Warner Music Canada and also broadcast on CBC.

Only four words are necessary to sum this album up, great music for a cause.

The Kumbaya festival has been held for three years now and is a great success. Various musicians, performers and speakers band together to raise money for the Kumbaya Foundation. The proceeds support services to people living with HIV and AIDS across our nation.

This sixteen track disc was originally recorded live during the Kumbaya festival in 1994. Leslie Spit Treeo dynamically initiates the album with "Just Want The Proof." The Watchmen play an energetic, strong and crowd pleasing "34 Dead St." BKS and Ashley MacIsaac do the "Swamp Thing." Together they uniquely create a fast paced combination of techno-dance music with traditional fiddling thrown in. Saskatchewan prairie popsters, the Waltons, perfectly perform their song, "Simple Brain." They later croon with The Pursuit of Happiness' Moe Berg with their heart felt number, "Gretzky Rocks," a short but upbeat and amusing song about Wayne Gretzky. Other well known musicians that appear on Kumbaya would include Kim Mitchell, Moxy Fruvous, Barenaked Ladies, Jann Arden, 54-40, and Big Sugar. A seven minute track, "All Along The Watchtower" concludes Kumbaya with numerous artists, including Tom Cochrane, Lawrence Gowan, Molly Johnson, and friends.

Kumbaya is a sixteen track accumulation of the well known, popular artists that were lucky enough to be invited to this event. What would be better than spending money your money on good Canadian rock while simultaneously benefitting people living with HIV and AIDS?