For Moxy Früvous, a pop quartet from Canada, touring is the key to achieving its goal and establishing itself in the United States. On Thursday night, the band proved that it has a live show to match its aspirations.

The band opened the concert with a cover of the Beatles' "Nowhere Man," which showcased its four-part harmonies. Immediately afterward, the band did a "Chinese fire drill" and switched instruments to perform two originals, "Half As Much" and "Sad Girl" from its latest album, "Thornhill."

In addition to its four-part harmonies, Moxy Früvous engaged the crowd with its four-part standup. The band discussed everything from Lafayette-West Lafayette rivalry, the Grammies, the quality of the towels that were provided for them and the United States' primaries.

The band then abandoned its instruments all together and wandered into the crowd with an a cappella song titled "I Love My Boss."

Moxy Früvous also did a rap version of Dr. Suess' "Green Eggs and Ham" that had the crowd dancing.

Moxy Früvous' live performance proved to be a non-stop stream of crowd-pleasing music and banter that couldn't be captured in any recording session. The show was laced with spontaneity and improvisation. Every song sounded fresh and original.

The band ended its set with a medley of popular songs and then came back for two encores.

The band showed off the versatility it gained through years of touring. The members played a mix of songs that crossed many boundaries and used a variety of instruments to do so. Throughout the course of the concert, the band used bass, drums, guitar, keyboards, an accordion, a banjo and a harmonica.

The audience was a diverse mix of people, some of who had seen the band the last time it played in Lafayette and a number of people who had never seen Moxy Früvous before.

Regardless of their previous experience with Moxy Früvous, after the fantastic live show, every member of the audience left as a devoted Frühead. 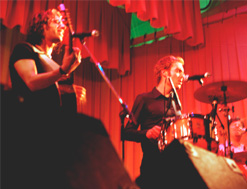 Back to the News Page...