Great Canadian Music, Moxy Fruvous, and the Enlightenment of the Soul

Great Canadian Music, Moxy Fruvous, and the Enlightenment of the Soul


This interview is courtesy of Andrew Hoshkiw, and can be found at www.geocities.com/SoHo/Studios/2216 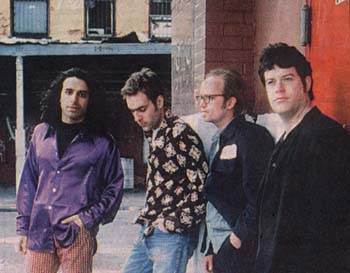 Friday, June 6th, 1997, Moxy Fruvous, a melodic quartet from Toronto, played The Rock Garden in St. Catharines, and with songs like "I love my boss" and "Your new boyfriend is a bit of a right-wing shit", they gave the crowd a really good imitation of The Beatles. They do Revolver, Dave Matheson's favourite Beatles album, great justice.


Honestly, though, these talented, young men have a unique and amazing sound. I must admit, I wasn't terribly familiar with them before the interview or the show; I knew little more than the hits they had several years earlier. Now I have been enlightened by an experience I will never forget.


After speaking with Dave Matheson, a guitarist and vocalist for the band, I finally learned what the name of the band means. According to Dave, Colgate, a number of years back, was doing quite badly, and was being beaten by their main competitor, Crest, who had a much wider range of gimmicky products. Dave's father-in-law, who was working at the plant, decided they would try going with a new product called Fruvous Toothpaste, which is related to the Latin term for "clean teeth". Although the product was never marketed, the band decided to use this word because it sounded neat, and because they all brushed well.


Moxy, Dave says, which was originally spelled Moixy, according to his Jewish friends is not a Yiddish word, but rather is the name for a soft drink from Maine, which has a very "feisty" taste, much like the band.


The most interesting characteristic of this band is that they are very energetic. They're in it not for the money (although they'd like to be more successful), but rather to have fun. And while not everything Dave may have told me is true, this is one quality he exerted in full force (through the interview, and the show).


At the start of every show, Dave says, they must put their hands on top of one another (like a baseball team) and make a cheer. The person who has his hand at the top of the pile must do something rude with his mouth, and according to tradition, the ruder it is, the better the show will be.


I asked Dave if he had any strange stories of his touring; he certainly did. Not too long ago, they were playing a bar in Vancouver called the Town Pump, when all of a sudden their sound man took off in the middle of the show (which never happens!) because he thought their car was being broken into. And he was right. "That cesspool of downtown," says Dave, "junkies who have nothing better to do than to bust into people's cars. I hate Vancouver. Fucking drunks and bums. You can quote me on that..."


Without a doubt, the band has character. "Everone's got their own nich in the band," says Dave. One has musical theory, another jazz, another funk. "We are inspired by this. We don't know where we're heading, and I don't mean how the numbers are doing, but the day to day getting along. It's fun. I'm comfortable with three other people, and not really worried where the sound goes. The longer we've been in this, the freer we feel to experiment. Yeah, I like the sound of that. You'll never find an album of ours that's the same as the last one. We're not Aerosmith. We're all pretty diverse."


I next asked him how they write songs. Do they do it as a group, or is it more like other bands, where just one or two people do the writing? "No, we're a team. We do it together. Sometimes one person will bring an idea to a meeting, and we'll all work on it. We'll all go home and write lyrics for it, and we'll see where it takes us. Sometimes we're very colaborative. And sometimes someone will write an entire song, and if the rest of us have no problem with it, then that's great." During the show I noticed an unusual thing about this band. They were all lined out in a row, up front. No one was in the back. Everyone was equal.


I asked how the band has been doing outside of Canada, and Dave said, "very well." They sold 1200 tickets to a show in Rochester, and throughout the United States their popularity is steadily rising. Their popularity has followed a big curve in Canada, having done really well a few years back, they've suddenly dropped. "How many tickets do you think we could sell in Toronto? Not very many." Indeed, The Rock Garden, at most, had 200 fans. "In London, England, we can sell 500 tickets, and that's good for us. In the States were being promoted by a new label, Bottom Line records, and we like what they're doing. Our last label, Atlantic records, didn't treat us as a high priority."


The show was very energetic, and featured many songs off the new album You will go to the Moon, as well as plenty of old classics, like "Once I was the king of Spain" and "Green eggs and ham". Dave noted he had a pair of vinyl pants, but unfortunately would not be wearing them during the show. Near the end, they played a wonderful rendition of "Billy Jean" / "Love Me Love Me Say That You Love Me", in which they constantly switched back and forth between the two, once again demonstrating their talent and their resourcefulness. They would have to be one of the best Canadian acts I've seen (well, except for maybe Moist, but hey, they're from Vancouver!). I can't wait till they come again. Dave Matheson, Mike ford, Murray Foster and Jian Ghomeshi, thanks for a great show!

Back to the News Page...